Bowlsby bullish about future as tourneys near 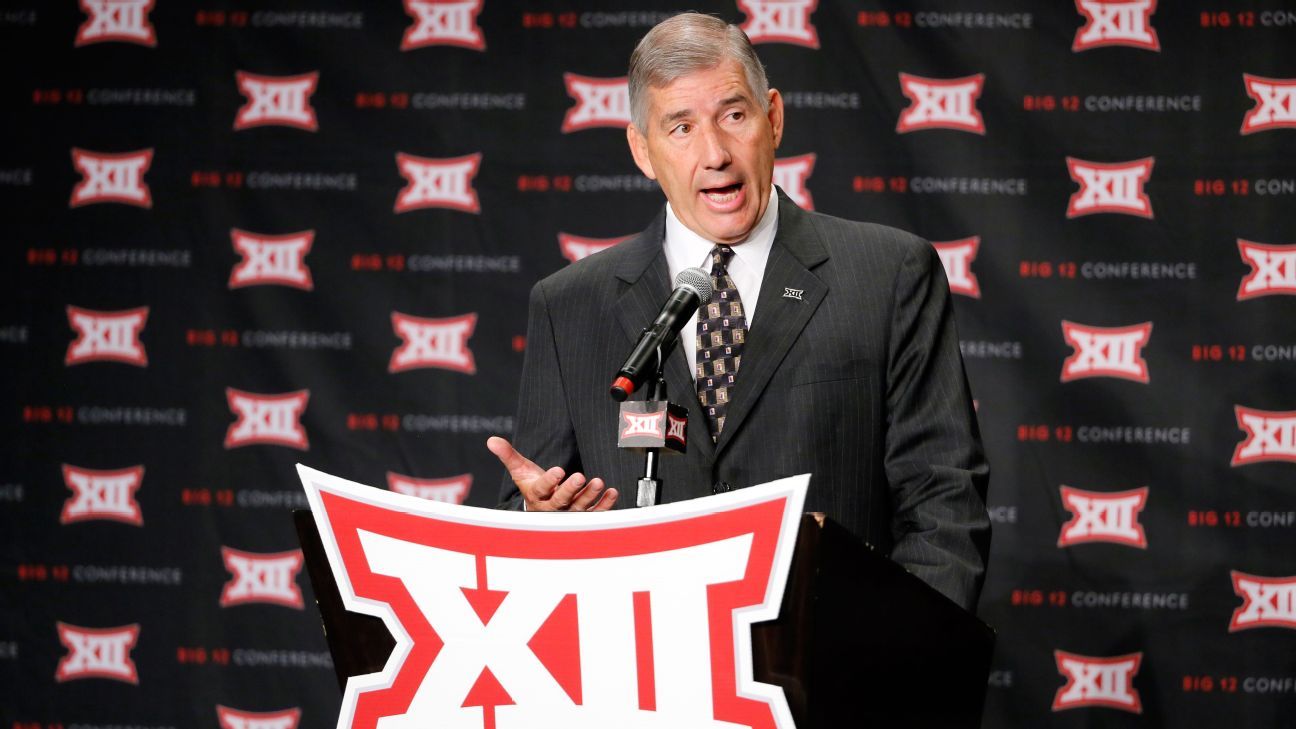 KANSAS CITY, Mo. — Big 12 commissioner Bob Bowlsby said it could be “a matter of years” before its schools recover from the financial blow they took when the COVID-19 pandemic shut down sports and then limited how games have returned.

The loss of revenue from the canceled Big 12 and NCAA tournaments last season, just as the first outbreak was forcing emergency health declarations across the country, was only the beginning. Even when college sports returned in the fall, there were curtailed schedules, reduced capacities and the added expenses of testing and contact tracing.

“There isn’t any way to put a good face on it. You all lived it like I lived it,” Bowlsby said Monday. “If I could find out who to ask, I’d ask for a refund on 2020. It was not a good year by any measuring stick.”

Yet the admittedly impatient Bowlsby believes there is reason to feel good about the future.

The number of positive cases across the country has been on the decline. More vaccinations are being shipped to all corners of the country daily. A more normal fall sports season complete with full stadiums seems at least possible.

Then there’s the return of March Madness next week. Already, conferences are crowning their champions and preparing to send them to Indiana for the NCAA tournament. The Big 12 opens its tournament Wednesday night.

“There were, I guess, no times during the season we really didn’t think we’d get here,” Bowlsby said, “but we weren’t ever sure exactly what kinds of things we might have to work around in order to accomplish that feat.”

Several teams went through multiweek pauses because of outbreaks, numerous games were rescheduled and a few will not be played. But when Bowlsby arrives at T-Mobile Center in Kansas City for the opening game between TCU and Kansas State on Wednesday night, he’ll feel a lot better about the state of the conference — and the world.

“Last year was kind of surreal, to tell you the truth,” he said. “Things were moving quickly. They were happening in real time. I remember we were on the phone with our presidents and chancellors, we had all the (athletic directors) in a room — we didn’t even know about social distancing at the time. Then I remember sitting at the press conference and it was a little bit of an out-of-body experience. You don’t expect to have to say, ‘Yeah, we’re serious. We’re not playing.'”

Bowlsby has reason to be glad the Big 12 was able to get through this season.

Second-ranked Baylor has been nipping at the heels of unbeaten Gonzaga all season, its only loss coming on the road against Kansas. No. 10 West Virginia starts a run of four straight Big 12 teams in the Top 25 — the Jayhawks are next with Oklahoma State and Texas right behind them. Throw in No. 20 Texas Tech and No. 25 Oklahoma and the powerhouse league has seven ranked teams heading into the conference tournament with several a legitimate Final Four threat.

• Bowlsby said the league has no jurisdiction when it comes to requiring players and coaches to get the COVID-19 vaccine. But he also thinks schools will be pushing hard before fall classes begin.

“There may be people for medical reasons or religious reasons or whatever reasons, they choose not to take the vaccine,” Bowlsby said. “Having said that, our society and our teams and our campuses will be better off when the vaccine will be widely distributed and administered.”

• Bowlsby was asked whether he thinks fans, many of whom have grown accustomed to consuming sports solely on TV over the past year, will return to stadiums when the pandemic is over or whether they will continue to watch from afar.

“That’s an interesting question because for the most part television viewing of events is down,” he said. “I’m not absolutely sure why that’s the case, (but) I theorize one of the reasons people watch sports is the uncertainty of the outcome, and it may be that we all have enough uncertainty in our lives. That’s just a theory.

“Will people come back to stadiums in large numbers? I believe they will,” Bowlsby added. “The environment is fun, and people like to come back to their campuses. They identify with their schools. I think they identify with their teams and their coaches. Having said that, I think public confidence is going to have to be rebuilt. I don’t know how long that will take.”