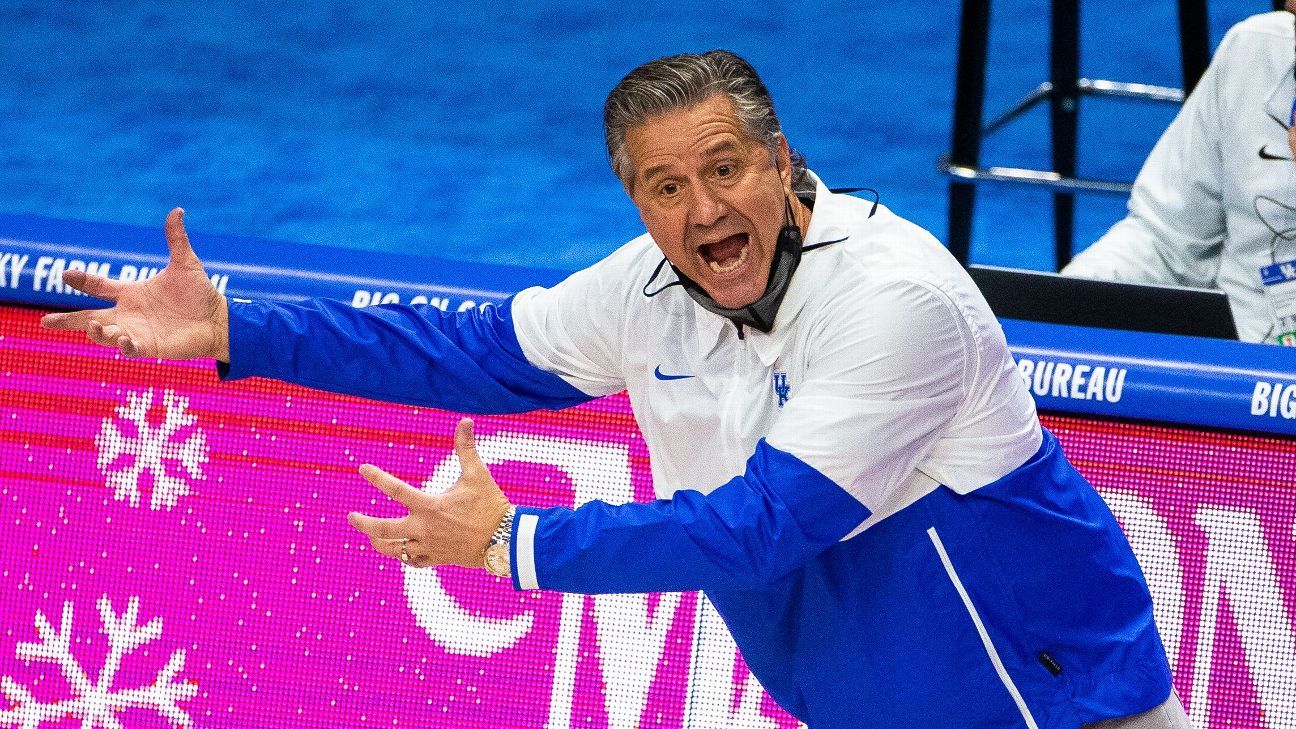 The Kentucky men’s basketball season ended with a missed last-second shot in the SEC tournament.

But things began spiraling downward for the Wildcats long before Thursday’s disappointing 74-73 setback against Mississippi State that sealed their fate: No NCAA tournament this year.

When the Bulldogs’ Iverson Molinar made two free throws with seven seconds left, it assured the Wildcats (9-16) will miss the NCAA tournament for the first time since 2013 and just the second in John Calipari’s 12-year tenure in Lexington.

“We were a couple of wins away from being a team; even with a bad record, we were right there,” Calipari said of Kentucky’s NCAA prospects. “But at the end of the day, you’ve gotta win games and you’ve gotta be tough and you’ve got to play winning basketball. … We were never able to get fully engaged in that.”

With Duke withdrawing from the Atlantic Coast Conference tournament due to a positive COVID-19 test, it most likely will be the first time since 1976 that both the Blue Devils and the Wildcats will not be in the NCAAs.

Digesting the reality and enduring a losing season at college basketball’s winningest program will make for a long offseason for the Wildcats.

“I’ve never lost this many games in my life in basketball consecutively like this,” graduate guard Davion Mintz said. “I know other guys on this roster haven’t, either. But now you know how it feels. You don’t want to climb back into that hole. You don’t want that pain to come back.”

Kentucky dug that deep hole in the season’s first month, and it became harder to climb out of as the losses piled up.

The Wildcats were able to string together a couple of three-game winning streaks but still finished seven games under .500 in the pandemic-shortened season. Those spurts merely halted slides of six and four games, respectively, which meant the blue-blood program needed to mount its longest winning streak of the season and win the SEC tournament to extend its season.

The last time Kentucky was out of the Big Dance was in 2013 after going 21-12 — then it was promptly bounced from the NIT by Robert Morris in the first round. Don’t look for the Wildcats in any postseason tourney this year. It’s the program’s first losing campaign since going 13-19 in 1988-89, one that approached historic proportions as Kentucky’s worst since the 1926-27 squad began 1-8 on the way to a 3-13 ending.

A 2020-21 opening-game rout of neighboring Morehead State — which went on to win the Ohio Valley Conference tournament for an automatic NCAA bid — was followed by a six-game losing streak that included a loss to rival Louisville. The Wildcats rebounded to win their first three SEC games, only to seesaw between a four-game skid and three-game winning streak.

Developing chemistry took time for a team that returned just sophomore forward Keion Brooks Jr. and welcomed 10 new faces. Like many teams, the Wildcats had little practice or free time together because of pandemic restrictions.

Injuries that sidelined Brooks the first nine games and Terrence Clarke for more than two months until Thursday didn’t help, either, leaving the Wildcats vulnerable in the post.

One of the main issues for the Wildcats was putting up points, as Kentucky ranked 200th in Division I in scoring. The offense began showing some promise in mid-February, though it wasn’t consistent enough to get the wins needed to get close to .500 and merit postseason consideration.

The inconsistent play that led to many ebbs and flows also raised questions about the talent level of the consensus No. 1-ranked recruiting class, along with the Hall of Famer’s one-and-done model. Calipari’s coaching methods and rotations also came under fire.

It’s unclear which Wildcats freshmen will enter the NBA draft.

The most likely candidate is freshman forward Isaiah Jackson, who blossomed into a formidable rim protector before recently revealing his offensive skills. He’s projected as a lottery pick despite fouling out with just seven points and three rebounds in 19 minutes against MSU on Thursday.

Guard Brandon Boston Jr. battled for offensive consistency all season but is rated as a first-round selection on several draft sites.

Mintz and Wake Forest transfer Olivier Sarr are likely gone as seniors, though both could return if the NCAA grants an extra season of eligibility because of the pandemic that created pauses for many programs.

Whatever happens, Kentucky has work to do to bounce back from this low point in program history.

“I’m disappointed in the record, but not disappointed in these kids,” Calipari said, being careful not to look too far ahead. “We weren’t what we thought we could be in different spots, but we’ll address that when this winds down.”