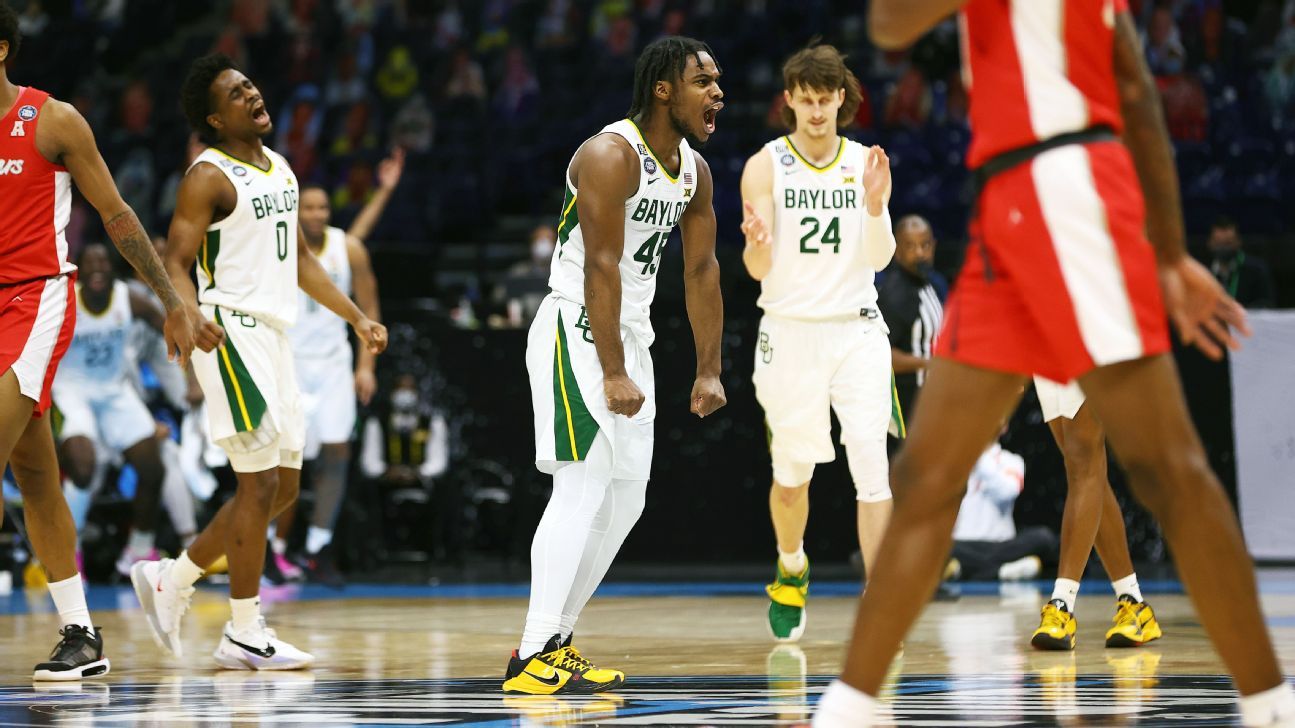 INDIANAPOLIS — By halftime of Baylor’s 78-59 win over Houston in the men’s basketball Final Four on Saturday, it was clear the two programs, one from the Big 12 and another from the American Athletic Conference, were operating on two different levels.

Baylor’s 45-20 edge entering the break was the largest halftime lead in a Final Four game in 18 years and the fourth largest in Final Four history, according to ESPN Stats & Information research. Marcus Sasser had scored 17 points at that juncture. The rest of the Cougars had combined to record just three by halftime.

Jared Butler finished with 17 points, five players recorded double figures, and Baylor made 46% of its 3-pointers. That’s the story of the game.

On Saturday, Baylor did all of the things that have made it a national title contender and the game’s most dominant program since the start of the 2019-2020 season. The Bears have lost just five games since Nov. 8, 2019.

Baylor now prepares for Gonzaga on Monday. The Bulldogs were indeed tested by UCLA in the second national semifinal game, before escaping with a 93-90 overtime win. In December, Baylor and Gonzaga were set to meet before the game was canceled hours before tipoff because of positive COVID-19 tests within Gonzaga’s program.

“They’ve got pros,” Butler said after his team’s win over Houston. “We’ve got pros.”

Scott Drew, orchestrator of Baylor’s long-term turnaround for the ages, said both he and Gonzaga coach Mark Few agreed — after their game was canceled four months ago, that a meeting in the NCAA tournament might be on the horizon.

“It will be a hard-fought game,” Drew said on Saturday. “Coach Few and I joked when the game got canceled and we went to the arena and we did a press conference saying that the game was canceled and whatnot. And as we were riding back we were, like, you know what, if we end up playing this game in the Final Four or the championship game, that sounds like a better idea, so that was obviously the goal for both of us.

Since the original game was canceled, the Bulldogs have marched toward history, preserving their unblemished record in pursuit of the first perfect season in 45 years. Even as late as Saturday night, that seemed in jeopardy before Gonzaga’s buzzer-beater for the win.

Meanwhile, Baylor kept pace with the Bulldogs until a three-week pause due to positive coronavirus cases seemed to disrupt the program’s mojo.

Baylor lost at Kansas in its second game back before losing to Oklahoma State in the Big 12 tournament semifinals. The latter, per Drew, actually helped Baylor regain its focus.

“We lost to a very good Oklahoma State team in our conference tournament, which was a blessing, looking back, because we were able to practice and really get better at our defense, which at the end of the day we wouldn’t be here today if we [in the] second half didn’t lock down and do a really great job down that stretch,” Drew said after his team’s win over Arkansas in the Elite Eight.

Indeed, this has been an improbable run for Drew at Baylor. When he arrived in 2003, the program was stuck in one of the worst scandals the sport had ever seen. After Carlton Dotson was arrested for murdering teammate Patrick Dennehy, former coach Dave Bliss resigned after an assistant coach caught him on tape encouraging players to create a story about Dennehy that would have painted him as a drug dealer to throw investigators off the scent of Bliss’ illegal actions, which included improper payments to players, including Dennehy.

“I’m extremely excited about being a part of the Baylor family,” Drew said at his introductory news conference in 2003. He was hired shortly after Bliss resigned, and Drew was asked to perform a miracle on a program that had not been to a Final Four since 1950.

In Drew’s third season, Baylor finished 4-13 amid major NCAA sanctions from the Bliss era, including a ban on nonconference games. After Saturday’s win, he credited the people in his corner for helping him push forward after the early challenges at Baylor.

“Well, every day you’re grinding,” Drew said about the journey on Saturday. “And you really don’t look back. You just keep pressing forward. And I’ve been so blessed to have unbelievable players that have bought into what we like to do with the program, tremendous assistant coaches that have sacrificed so much time, hard work, sweat to get us here.”

Saturday’s game, however, sealed the program’s first national title game appearance since 1948. It also added another chapter to Drew’s narrative.

Baylor wasn’t just a struggling program when he arrived. It had been hit with an unprecedented set of challenges. But his patience has paid off.

Even when his team had to pay the price for a previous coach’s actions, Drew stayed positive.

“The light is definitely at the end of the tunnel,” Drew said in 2005.

On Monday, at Lucas Oil Stadium in Indianapolis, Baylor and Drew aim to shine bright again.

Sales Pitch: How do Gonzaga and others outside the top conferences entice recruits?