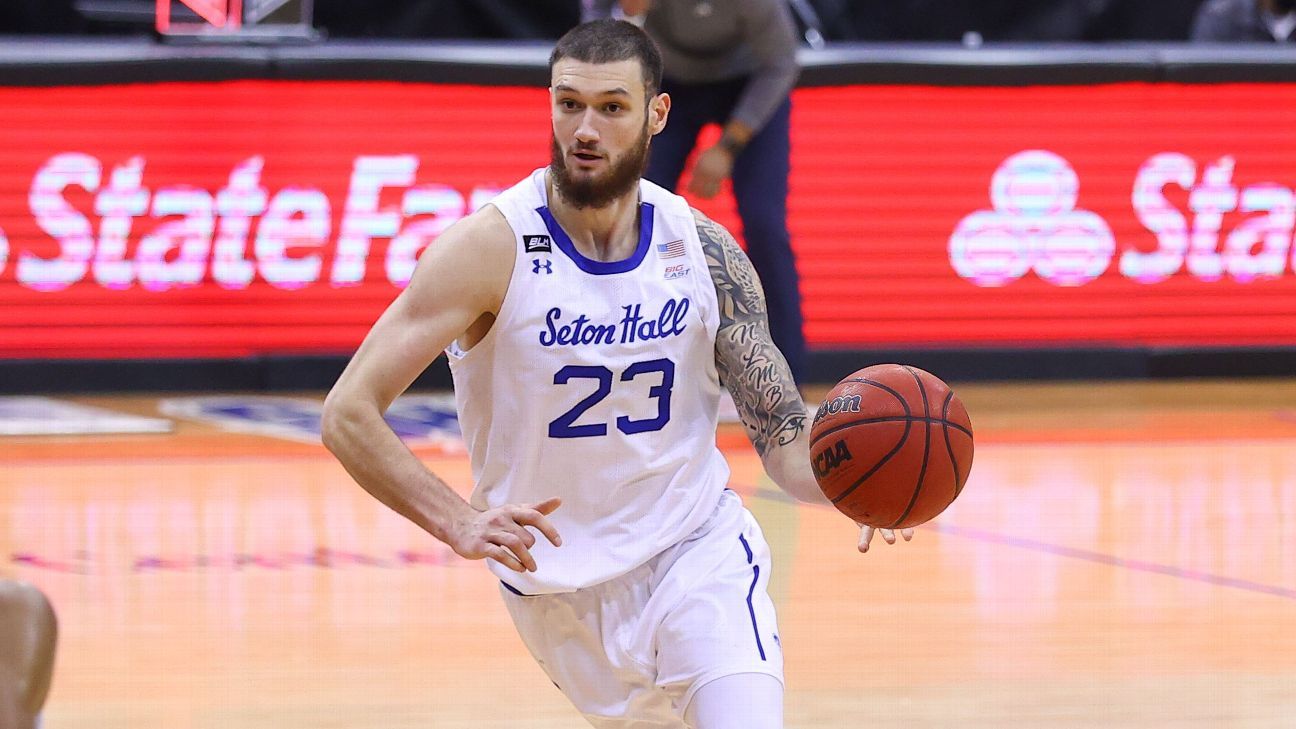 NEW YORK — For the first time in the 42-year history of the Big East Conference, three players will share the league’s player of the year award.

Seton Hall’s Sandro Mamukelashvili, Villanova’s Jeremiah Robinson-Earl and Collin Gillespie tied in the voting by the league’s coaches, who were not permitted to vote for their own players.

St. John’s Posh Alexander was named the league’s freshman of the year, and his coach, Mike Anderson, was selected coach of the year.

Seton Hall junior center Ike Obiagu was named the men’s basketball scholar-athlete. The selection was made by the conference’s Academic Affairs Committee.

The awards were announced Wednesday as the conference opened its tournament with three games at Madison Square Garden.

Mamukelashvili moved into a leading role for the Pirates after Myles Powell, last year’s Big East Player of the Year, graduated. He finished second in the league in scoring, with a 17.8 average, and added 7.3 rebounds. The native of the Republic of Georgia is one of two league players to be ranked in the top six of both categories.

Robinson-Earl and Gillespie have been Villanova’s top two scorers, though their value to the Wildcats goes beyond just points. They led Villanova to the regular-season title with an 11-4 league record and a 16-5 overall mark.

Robinson-Earl, a sophomore forward from Kansas City, Kansas, is the top scorer and rebounder, averaging 15.2 points and 8.4 boards. Last season’s freshman of the year also is an outstanding defender.

The Wildcats’ floor leader, Gillespie averaged 14.0 points and 4.9 assists. The senior from Huntingdon Valley, Pennsylvania, leads the league in assists-to-turnover at 2.7. His season was cut short last week when he suffered a knee injury.

Alexander, who was named a co-winner of the league’s defensive player of the year on Monday, averaged a league-best 2.6 steals, eighth in the country. The New York City native also averaged 11.2 points and 4.3 assists. He becomes the first player in the league to take the defensive and freshman awards since Georgetown’s Allen Iverson in 1994-95.

After being picked ninth in the coaches’ preseason poll, the Red Storm (16-10) went 10-9 in the conference under Anderson and are seeded No. 4 seed in this week’s tournament. Anderson has never had a losing season, posting a career record of 402-225 (.641).

Obiagu is an accounting major from Nigeria with a GPA above 3.7 who plans to enroll in graduate school at Seton Hall next year. His 69 blocked shots were sixth best in the nation this season, and he will receive a $2,000 scholarship.