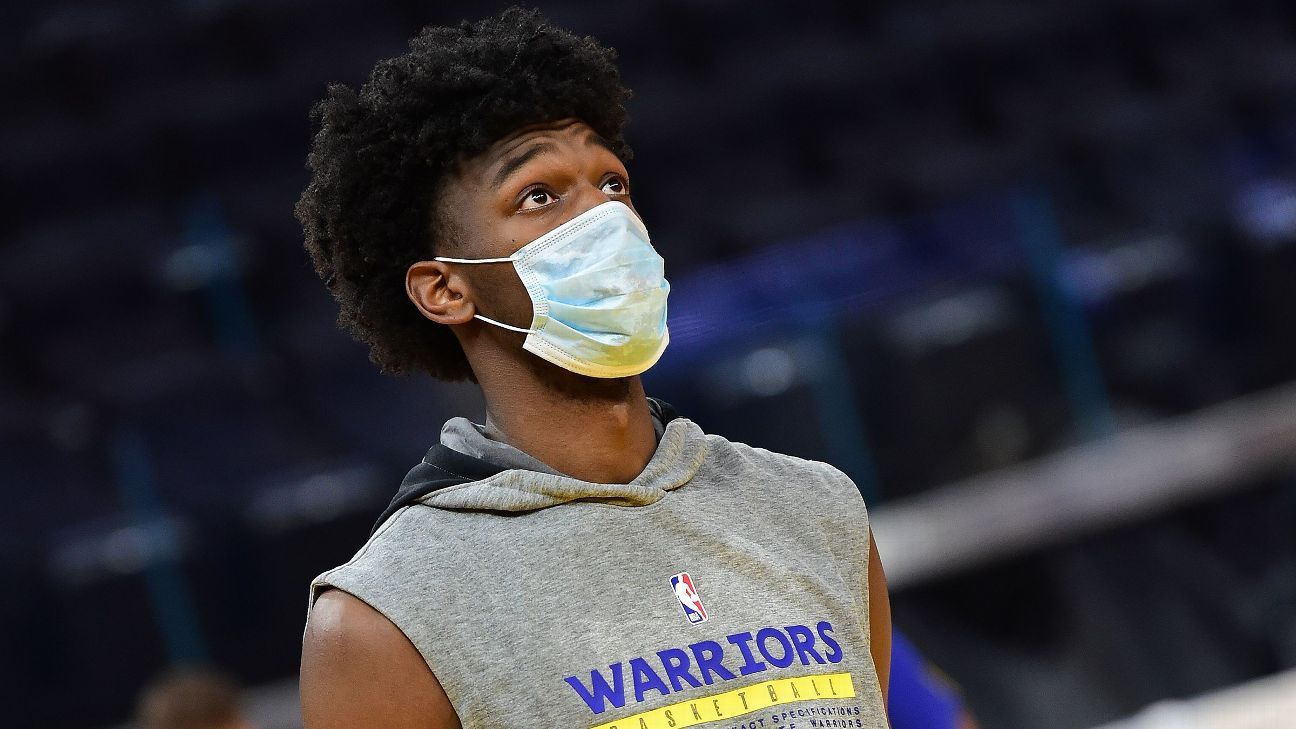 Golden State Warriors center James Wiseman missed a COVID-19 test during the All-Star break that forced him to miss Wednesday’s practice, putting his status for Thursday’s game against the LA Clippers in jeopardy.

Kerr, who said he was unsure if Wiseman would be able to play, noted that Wiseman didn’t travel anywhere during the break, deciding to stay home in San Francisco.

As Warriors forward Eric Paschall explained, the restrictive NBA protocols put into place throughout the season didn’t change during the break, other than players could enjoy outdoor dining, if desired. Players were required to test every day — and given two different time slots to do so — and could test at the Warriors’ facility if they did not travel out of the city.

Warriors star guard Stephen Curry is hopeful that Wiseman will learn from his mistake as he moves forward into the second half.

“It’s what you have to do,” Curry said. “For a rookie to come in, there’s obviously a lot of things thrown at you, just in terms of what’s happening on the court, but now, obviously, all the protocol stuff and the accountability of the break, but I think we all understand this is our job and we have things to do. When you don’t do them, it’s put you behind a little bit, so hopefully he won’t be out long. I don’t know what the situation really is, to be honest.

“But, I think we all got to do our part to get through this season. It’s been good so far, so I don’t expect that to continue.”

Curry said he saw Wiseman earlier Wednesday and sounded confident that his teammates would keep the 19-year-old rookie in check as the season continues. Wiseman, who missed most of training camp because of COVID-19 protocols and missed almost a month because of a wrist injury, has had an up-and-down campaign while averaging 11.8 points and 5.9 rebounds after being taken with the second overall pick in the 2020 draft. He acknowledged after last Thursday’s first-half finale in Phoenix that the highs and lows of his first professional season have been “hard” to deal with.

“Just communication,” Curry said, when asked how the Warriors can keep Wiseman from getting down on himself. “His personality, he does strive to be great and he has that sense that he’s supposed to be perfect all the time. Sometimes I think for him, one, just whatever the situation is right now, it will work itself out and he’ll get back as quickly as possible, but to hold himself accountable like every other guy in the locker room, to do your job, to show up with the right mindset every day, and if he needs some guys’ direction whether it’s from anybody on our squad, be able to ask.

Kerr also said Kelly Oubre Jr. will play Thursday after missing the past two games because of a left wrist injury suffered in practice last week. Forward Draymond Green will also be back after missing last Thursday’s game while continuing to recover from a sprained left ankle suffered in a loss to the Los Angeles Lakers on Feb. 28.

After hinting at the possibility prior to the end of the first half, Kerr also said there would be rotational changes heading into Thursday’s game against the Clippers.

“I thought about it a lot,” Kerr said. “I watched. First of all, I had a great break. So, I didn’t spend the entire time in a cave watching tape, but I did watch several games sort of strategically thinking about lineups and different combinations, that sort of thing.